Case studies can introduce you to new thought patterns and ideas about the kind of help you need. Understanding why someone chose a natural path to healing is highly beneficial when choosing a route to achieving better health. Identities have been hidden to preserve professional and personal confidentiality.

We have selected a variety of typical therapy case studies that have been successfully treated by Michael at Halesowen Acutherapy. These case studies demonstrate how our services could work for you. With our care and expert treatment, you too can begin to help yourself on the road back to better health. 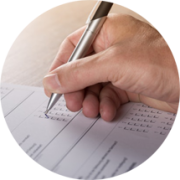 OSTEOPOROSIS & SIDE EFFECTS OF MEDICATION

A 56 year old female nurse had been diagnosed with Osteoporosis 5 years ago after she was admitted to hospital with a broken hip. Her doctor prescribed Alendronic acid medication for post menopausal Osteoporosis, to reduce the risk of Vertebrae and Hip fractures.

Possibly, as a result of this medication, she developed dry itchy skin in various parts of her body, especially on her hips. The itchiness could be intense at times causing considerable discomfort. She was also experiencing pain quite often, mainly on her lower back, neck and left hip. Accompanying symptoms were drawing and pulling sensation and also pins and needles. In addition to this, she was feeling weak and tired and woke up frequently throughout the night. The patient is a health conscious individual. She is careful with her diet and attends regular Yoga and Tai Chi classes.

At her first visit a Traditional Chinese medicine diagnosis was carried out. This involved asking questions about her symptoms, her general health, palpation and also taking her pulse and looking at her tongue, as this provides useful diagnostic information. All this information was assimilated in order to establish overall patterns of imbalance.

With traditional acupuncture, as with other holistic therapies, treating the root of the problem is in most cases preferable to treating individual symptoms. During the course of treatments, a holistic strategy was deployed with the primary aim of improving the patient’s general health. This slows down further degeneration of bone density, subdues the side effects of drugs and elevates pain. Specific acupuncture points were needled in different combinations according to traditional Chinese medicine patterns involved.

These points were chosen in order to strengthen immunity, promote the body’s vital energy and blood circulation, strengthen Kidney and Liver organ functions, calm the mind, boost energy levels, Tonify marrow to strengthen bones, relax muscles as well as addressing the patient’s chief complaints. During the course of 16 weekly visits results could fluctuate. Therefore the treatment was modified slightly according to how her symptoms were presented themselves.

On week 6, she reported only slight discomfort in her shoulder. At week 7, her skin felt less dry, no itching, no hip pain. As the treatment continued the patient’s symptoms did re- appear at times, although the effect was not as severe and of a shorter duration. On her last visit the patient reported a 90% overall improvement.

Two weeks after the last treatment I was pleased to hear that after she had a DEXA scan the reading showed that no further bone degeneration.

This is an example of how acupuncture can complement western treatment and also alleviate side effects from medications. In this case efforts made by the patient to retain a healthy life style helped in the process of achieving satisfactory results.

“When I came to see Michael I was suffering from back pain, also skin irritation and hip pain. This really affected my ability to do the things I enjoy. When the needles were inserted I felt heat travelling through my body, and after this I felt very calm and relaxed. I am now sleeping so well and feel full of energy during the day. I am very pleased with the results, my skin irritation and itching has reduced and my overall health is much improved”.

The patient is a 46 year old female who came for treatment with stress related problems after recommendation by her GP. Symptoms include anger, anxiety, insomnia and low energy. She has a very stressful job in Health & Social Care and is continuously under pressure to meet deadlines, often working long hours and her job involves manual handling and huge responsibilites. She also has pain in her lower back on both sides lateral to the spine just above the sacrum. This pain has been present for two years, making every day activities difficult.

After the initial consultation which involves questions about her general health, taking her pulse looking at her tongue, and also different tests and palpation, she received massage on the whole back as well as upper and lower legs. Appropriate Tui Na techniques were used focusing on tender areas and also on acupressure points according to traditional Chinese diagnosis. In addition to this she received a head and neck massage in supine position to relax muscles in these areas and help with the stress and insomnia. Combinations of acupressure points that work wonders for stress and insomnia where combined with others that are very effective for lower back pain.

After the treatment the patient reported that she did experience some tenderness during treatment, but she felt generally good. The tenderness is due to muscles not been sufficiently relaxed. Next day she reported that the back pain was almost gone and she felt great. Also she managed to sleep better.

The previous treatment was repeated a week later but more time was spent to warm the muscles. Tui Na techniques were used such as plucking, double thumb kneading, rolling etc. with the addition of manipulations ( stretches ) for the neck and the back in supine and side positions. She felt relax after the treatment and did not feel any tenderness this time during treatment. A week later the patient reported that her back pain is gone, sleeping is almost back to normal and she feels in general like a different person.

This is a two treatment case in which satisfactory results were achieved with Tui Na in a short period of time. However further treatments combined with life changing habits is recommended to the patient, as it would be beneficial for sustaining results in the long term.

“I was surprised and pleased after only one treatment, my back pain was gone. I have started sleeping very well at night and felt like a different person, the practice room was very relaxing and tranquil”.

The patient is a 67 year old male suffering from knee pain. The condition was diagnosed by his doctor as knee osteoarthritis who suggested a knee operation, and prescribed pain killer medication.

Whilst waiting for the operation he decided to try a few Acupuncture treatments to see whether this would alleviate some of the pain, in order to reduce some of his medication. The patient’s condition was possibly as result of a broken leg injury he had back in 1984. He started having the pain in his left knee 5 -6 years ago and it became progressively worse. He also mentioned that his right knee is also affected due to overuse.

The pain as described by the patient was of a sharp stabbing nature and at an intensity of 9 out of 10 intensity scale, especially when he is resting in the evenings. The pain would keep him awake most of the night. He is also experiences sudden locking of his knee.

Following the initial consultation tests revealed that the patient had very limited movement and he can only flex his knee up to 45 degrees. Upon palpation I also found several areas of tenderness and tightness around his knee as well as on the upper and lower legs, particularly the left leg. This is common because a problem of the knee joint can restrict the blood circulation in other areas of the leg.

On the first treatment I used mainly acupuncture points combination indicated for knee pain followed by 15 minutes Tui Na massage on both legs as this would enhance the effectiveness of the treatment of any Musculoskeletal condition. After the first treatment the patient reported a decrease in the pain, he could flex his left knee to 90 degrees and had no pain when he straightens his leg. However, the patient commented that it was still a little painful when sitting.

Throughout 6 sessions I combined Acupuncture with 15- 20 minutes Tui Na on both legs and feet mainly to relax muscles and get the blood moving.

The Acupuncture points used varied from time to time according to the way that his symptoms were presenting themselves, but certain points were always used to directly address the knee osteoarthritic symptoms.

After the second visit he reported no locking of his knee, and no tightness, but he had some pain for a day or two after the treatment. Following the third treatment he reported that his mobility seemed better but still felt a bit of pain located under the medial condyle of the tibia. The pain now seemed to be located in specific area, rather than throughout the whole knee. After 6 sessions the patient reported 70 – 80% Improvement and managed to reduce his medication from several times a day to 3 times a week.

This is an ongoing case which requires more treatments in order to stabilize. The patient has now received a total of 6 treatments combining Acupuncture with Tui Na massage and manipulations. Each treatment lasted approximately 60 minutes and treatments were administered over a period of 40 days.

Although not necessarily curing the patients osteoarthritis, the treatments were successful in decreasing the pain, improve mobility and enable the patient to reduce his medication.

“I’m guilty of trying avoid knee replacement surgery for a while but had to admit to struggling with pain and mobility. After my Daughter in Law persuaded me to try these treatments, I am very happy that I did! Nice relaxing atmosphere, Michael was very thorough and made me feel at ease as I was a little nervous to begin with. After each treatment I had less pain and better mobility. I had less discomfort at night as I didn’t need to keep repositioning my legs”.